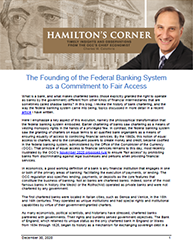 What is a bank, and what makes chartered banks (those explicitly granted the right to operate as banks by the government) different from other kinds of financial intermediaries that are sometimes called shadow banks? In this blog, I review the history of bank chartering, and the way the federal banking system came into being, topics discussed in more detail in a recent article I have written.

Here I emphasize a key aspect of this evolution, namely the philosophical transformation that the federal banking system embodied. Earlier chartering of banks saw chartering as a means of vesting monopoly rights in the hands of a privileged few. In contrast, the federal banking system saw the granting of charters on equal terms to all qualified bank organizers as a means of ensuring equality of access to controlling financial services. By the 1860s, this notion of equal access to charters, and to the consequent powers to create money and credit, became codified in the federal banking system, administered by the Office of the Comptroller of the Currency (OCC). That principle of equal access to financial services remains to this day, most recently illustrated by the OCC's November 2020 proposed rule to ensure “fair access” by prohibiting banks from discriminating against legal businesses and persons when providing financial services.

In economics, a good working definition of a bank is any financial institution that engages in one or both of the primary areas of banking: facilitating the execution of payments, or lending. The OCC regulation also specifies lending, payments, or deposits as the core features that constitute the business of banking. Not all banks are chartered banks. Indeed, some of the most famous banks in history (the Medici or the Rothschild) operated as private banks and were not chartered by any government.

The first chartered banks were located in Italian cities, such as Genoa and Venice, in the 15th and 16th centuries. They operated as unique institutions and had special rights and institutional capabilities by virtue of their government-granted charters.

As many economists, political scientists, and historians have stressed, chartered banks partnered with governments. Their rights and burdens served government objectives. The Bank of England, which retained its unique status as the only chartered bank in England or Wales from 1694 through 1825, began its history as a mechanism for exchanging sovereign debt in a manner that reduced the sovereign's funding costs. Amsterdam's Wisselbank, chartered in 1609, mainly served as a clearinghouse for merchants' bills of exchange used to finance international trade, which helped to propel the growth of the Dutch as an international power.

American colonists focused a great deal of attention on the gains from chartering banks, either to help their governments finance war efforts, or to promote economic development. Benjamin Franklin, for example, was a strong proponent of the developmental consequences of chartered banks, especially land banks.

In the early American Republic, individual states and the federal government-chartered banks. Initially, few banks were chartered, and they often had unique powers linked to their charters. For example, the First Bank of the United States, chartered in 1791, acted as a fiscal agent for the U.S. Department of the Treasury and was partly owned by the U.S. government.

Initially, chartered banks were few, and charters were granted by special acts of the state or national legislatures. Often powerful members of the elite organized these banks and held sway over the chartered banks' business practices.

Starting in the 1820s, opposition grew to the system of special chartering of banks, mainly because control over charters by the politically powerful members of the elite meant that not everyone had equal access to bank credit. In a recent article by Professors Naomi Lamoreaux and John Wallis, this movement against special chartering is analyzed in some detail. By the 1850s, special chartering had given way to “free banking” in most states. Free banking meant that anyone who could meet the rules and standards specified by the chartering law could apply for a bank charter.

From 1791 to 1811, the First Bank of the United States was the only bank chartered by the federal government. When its charter expired, it was not renewed. In 1816, the Second Bank of the United States was chartered, and it too operated as the only nationally chartered bank until the 1830s. Its charter renewal was opposed by Andrew Jackson, and Jackson vetoed the rechartering of the Second Bank of the United States in 1832. Jacksonian monetary thinkers, including the future Secretary of the Treasury under President Lincoln, Salmon Chase, were not against national chartering of banks, but instead favored a system that would avoid the special granting of monopoly privileges. They also sought a system that would ensure that currency issued by the banking system would trade reliably at its face value.

The American Civil War created the catalyst for a major banking system restructuring, as the North sought a means to increase demand for government bonds issued to fund the massive war expenditures. The plan that created the federal banking system required government bonds as collateral for all currency issued by national banks and taxed state bank note issues prohibitively. National banks were chartered on the free-banking principle, under a common, pre-established set of rules that made national chartering open to any competent and reputable bankers who could satisfy those rules.

Thus, the principle of fair access to controlling banks, which had begun as a protest movement against the privileged elite in the 1820s, grew into a national system. Since its beginning in 1863, the chartering of national banks by the OCC has been one of the primary vehicles through which all Americans could be assured that credit services would be available to them competitively and was codified into the mission of the OCC by the Dodd–Frank Act in 2010.

That legacy continues to this day.