The Value of 'Soft' Supervisory Information 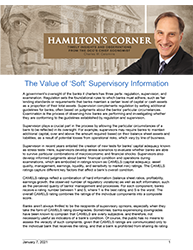 A government’s oversight of the banks it charters has three parts: regulation, supervision, and examination. Regulation sets the foundational rules to which banks must adhere, such as fair lending standards or requirements that banks maintain a certain level of capital or cash assets as a proportion of their total assets. Supervision complements regulation by setting additional guidelines for banks, often based on judgments about the banks’ particular circumstances. Examination is the process of observing how banks are performing and investigating whether they are conforming to the guidelines established by regulation and supervision.

Supervision plays a crucial part in the process by allowing the particular circumstances of a bank to be reflected in its oversight. For example, supervisors may require banks to maintain additional capital, over and above the amount required based on their balance sheet assets and liabilities, as a result of potential losses from operational risks, which vary by line of business.

CAMELS ratings reflect a combination of hard information (balance sheet ratios, profitability, earnings growth, the observed number of regulatory violations) as well as soft information, such as the perceived quality of banks’ management and processes. For each component, banks receive a rating number between 1 and 5, where 1 is the best rating and 5 is the worst. The overall CAMELS rating combines the ratings of the individual components into a composite score.

Banks aren’t always thrilled to be the recipients of supervisory opinions, especially when they take the form of CAMELS rating downgrades. Sometimes, banks experiencing downgrades have been known to complain that CAMELS are overly subjective, and therefore, not necessarily useful as indicators of a bank’s condition. Of course, the public has no means to assess the veracity of such complaints, given that CAMELS ratings are communicated only to the individual bank that receives the rating, and that a bank is prohibited from sharing its rating publicly, which makes it impossible for a bank to offer empirical evidence in support of such complaints to the public.

Researchers at the supervisory agencies have performed such research since the 1980s. Recently, a team of researchers at the OCC and the Board of Governors of the Federal Reserve System, consisting of Lewis Gaul, Jonathan Jones, and Pinar Uysal, has released a new working paper, which examines each of these empirical issues using a variety of sophisticated econometric methods and observations of CAMELS ratings and other relevant data tracked from 1984 to mid-2020. Their conclusions are unequivocal. CAMELS ratings reflect current knowledge of objective data as well as subjective judgment. CAMELS ratings are found to have significant predictive power for future bank earnings, stock return volatility, market-to-book value, loan nonperformance, and the risk of bank failure. The banking system’s aggregate CAMELS rating is also useful for forecasting macroeconomic variables, such as gross domestic product growth, inflation, and the unemployment rate.

The predictive value of the CAMELS rating remains important, even when observable prior characteristics of the bank are controlled for in the forecasting models. That fact indicates that it is largely the subjective, soft information contained in the rating that drives its value as a forecaster of future bank condition and risk. Furthermore, the authors find that the most informative component of the CAMELS rating is the management quality rating, which is especially reflective of examiners’ subjective judgment.

None of these conclusions should come as a surprise. Although the combination of cutting-edge econometric methods and the large database employed by the authors make the basis for the authors’ conclusions particularly strong, these conclusions confirm the findings of prior research by economists at supervisory banking agencies. Furthermore, historical research by Mark Carlson and me, forthcoming in the Journal of Money, Credit and Banking, finds similar evidence about the value of OCC examiners’ opinions as forecasters of future bank condition and risk. Historically, examiners were required to estimate future bank losses. We find that their estimates were remarkably good. When we decompose their loss estimates into the part based on knowledge, or hard information, and the part based on soft information, we find that much of the forecasting value of their loss estimates is traceable to soft information.

All of this evidence confirms that the soft information produced in bank examinations, which underlies supervisory judgments, such as historical loss estimates and current CAMELS ratings, is enormously valuable. In particular, because rating downgrades are informative about the risk of deterioration in a bank’s condition, they provide a timely alert to bank management—and the board of directors—a wake-up call, so to speak, that can help to produce improvements in a bank’s financial condition and operations, which the data confirm often occur. After all, the purpose of supervision is not just to predict loss, but to prevent it.