The results — reported by the Board of Governors of the Federal Reserve System, the Office of the Comptroller of the Currency and the Federal Deposit Insurance Corporation — are based on analyses that were prepared in the second quarter and reflect business and economic conditions that prevailed at that time.

Several key factors have adversely affected the quality of syndicated loans over the past several years including bank underwriting and risk selection standards, and economic factors. The seasoning of many aggressively underwritten deals, particularly those credits booked in the latter half of the 1990s, has contributed to the increase in adversely rated credits.2

Deterioration has been particularly evident for credits to leveraged and speculative-grade borrowers that are facing difficulty generating sufficient cash flow to service their debts in the current environment. It is important to note that most of the deterioration in the quality of syndicated loans is already reflected in the internal credit ratings of individual banks. 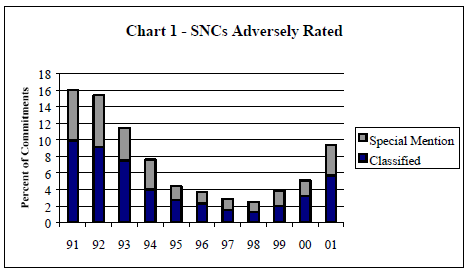 Of the $2.1 trillion in total SNC commitments, 51 percent is held by U.S. banks, 41 percent is held by foreign banking organizations, and non-bank firms hold the remaining 8 percent. In 2001, 5.4 percent of U.S. bank holdings were classified compared to 4.4 percent for foreign banking organizations and 14.5 percent for non-bank firms.

The weakening economy has had a greater impact on certain industry sectors (refer to Appendix B for broad industry trends). In particular, manufacturing companies have experienced increased credit problems since the previous SNC review, especially the textile and apparel, primary and fabricated metals, and machinery and equipment sub-sectors. Weakness in the manufacturing sector was also driven by asbestos litigation associated with various large borrowers.

Problems in the information technology sector (specifically the telecommunications industry) have been well documented and are evident in the substantial increase in adversely rated credits for 2001, albeit from low levels. While many established companies remain strong, a large number of start-up entities are experiencing difficulty generating sufficient cash flow for operations and debt service, and may be vulnerable to further deterioration in the event of a sustained economic slowdown.

Despite deterioration in the aggregate syndicated loan market, improvement is noted in several industries; the most noteworthy of which is healthcare. This sector shows signs of improvement associated with realization of merger and acquisition synergies and increased revenues, although the volume of adversely rated credits within this sector remains relatively high. The low volume of adversely rated borrowers within the real estate market remained relatively unchanged from last year.

For U.S. banks, the rapid deterioration in large syndicated loans comes at a time when the majority of banks have strong capital bases and earnings. While this moderates concerns, banking organizations must remain vigilant in the current environment to ensure that they promptly identify and address any continuation in credit quality deterioration and adjust loans loss allowance levels appropriately.3

1 The Shared National Credit (SNC) Program was established in 1977 by the Board of Governors of the Federal Reserve System, the Federal Deposit Insurance Corporation, and the Office of the Comptroller of the Currency to provide an efficient and consistent review and classification of large syndicated loans. The annual program covers loans or loan commitments of at least $20 million that are shared by three or more financial institutions.

2 Adversely rated credits are the total of loans classified substandard, doubtful and loss and loans rated special mention. Under the Agencies Uniform Loan Classification Standards, classified loans have well defined weaknesses, including default in some cases, while special mention loans exhibit potential weaknesses, which may result in further deterioration if left uncorrected.

3 For further guidance, institutions should refer to the July 12, 1999 Joint Interagency Letter to Financial Institutions on the allowance for loan losses, as well as the December 1993 Interagency Policy Statement on the Allowance for Loan and Lease Losses.

4 Due to the recent conversion of industry classification codes (from SIC to NAICS), the specificity of 2001 data exceeds that available for 2000. Accordingly, consistent year-to-year comparisons of industry sector information are not always possible. Broad NAICS groupings of industries identified In Appendix B for 2001 are as follows: Utilities and Transportation – 22, 48, 49; Real Estate – 23, 53, 72; Manufacturing – 31-33; Finance and Insurance – 52; Information – 51; Professional, Scientific, and Other Services – 54, 62; All Other – Remaining NAICS codes.