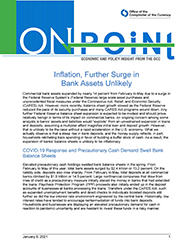 Commercial bank assets expanded by nearly 14 percent from February to May due to a surge in the Federal Reserve System's (Federal Reserve) large scale asset purchases and unprecedented fiscal measures under the Coronavirus Aid, Relief, and Economic Security (CARES) Act. However, more recently, balance sheet growth slowed as the Federal Reserve reduced the pace of its security purchases and many CARES Act programs wound down. Any further Federal Reserve balance sheet expansion is expected to be modest and should prove relatively benign in terms of its impact on commercial banks. An ongoing concern among some analysts is banks' assets and liabilities would "explode" from an unrestrained expansion in loans and deposits, assuming a multiplier effect magnifies initial loan and deposit growth. However, that is unlikely to be the case without a rapid acceleration in the U.S. economy. What we actually observe is that a steep rise in bank deposits, and the money supply reflects, in part, households ratcheting back spending in favor of building a buffer stock of cash. As a result, the expansion of banks' balance sheets is unlikely to be inflationary.