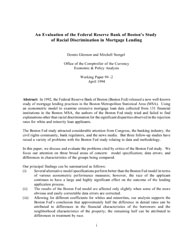 In 1992, the Federal Reserve Bank of Boston (Boston Fed) released a now well-known study of mortgage lending practices in the Boston Metropolitan Statistical Area (MSA). Using an econometric model to examine extensive mortgage loan data collected from 131 financial institutions in the Boston MSA, the authors of the Boston Fed study tried and failed to find explanations other than racial discrimination for the significant disparities observed in the rejection rates for white and minority loan applicants.

The Boston Fed study attracted considerable attention from Congress, the banking industry, the civil rights community, bank regulators, and the news media. But three follow-up studies have raised a variety of problems with the Boston Fed study relating to data and methodology. In this paper, we discuss and evaluate the problems cited by critics of the Boston Fed study. We focus our attention on three broad areas of concern: model specification; data errors; and differences in characteristics of the groups being compared. Our principal findings can be summarized as follows:

Several alternative model specifications perform better than the Boston Fed model in terms of various econometric performance measures; however, the race of the applicant continues to have a large and highly significant effect on the outcome of the lending application process.

The results of the Boston Fed model are only slightly affected when some of the more obvious and easily correctable data errors are corrected.

Allowing for different coefficients for whites and minorities, our analysis supports the Boston Fed's conclusion that approximately half the difference in denial rates can be attributed to differences in the financial characteristics of the borrowers and the neighborhood characteristics of the property; the remaining half can be attributed to differences in treatment by race.

We conclude with a qualified confirmation of the results of the Boston Fed study. However, we believe there are still several important specification issues that cannot be investigated, and several data problems that cannot be corrected, with the data provided by the Boston Fed. Additional research at both the MSA and the individual bank levels is warranted.