Banking Industry Consolidation: Past Changes and Implications for the Future (WP 95-1) 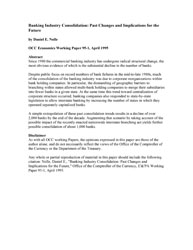 Since 1980 the commercial banking industry has undergone radical structural change, the most obvious evidence of which is the substantial decline in the number of banks.

Despite public focus on record numbers of bank failures in the mid-to-late 1980s, much of the consolidation of the banking industry was due to corporate reorganizations within bank holding companies. In particular, the dismantling of geographic barriers to branching within states allowed multi-bank holding companies to merge their subsidiaries into fewer banks in a given state. At the same time this trend toward centralization of corporate structure occurred, banking companies also responded to state-by-state legislation to allow interstate banking by increasing the number of states in which they operated separately capitalized banks.

A simple extrapolation of these past consolidation trends results in a decline of over 2,000 banks by the end of the decade. Augmenting that scenario by taking account of the possible impact of the recently enacted nationwide interstate branching act yields further possible consolidation of about 1,000 banks.