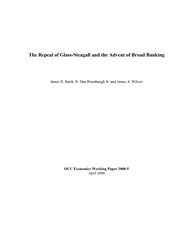 Enactment of the Gramm-Leach-Bliley Act (GLBA) in November 1999 effectively repealed the long-standing prohibitions on the mixing of banking with securities or insurance businesses and thus permits "broad banking." Since the barriers that separated banking from other financial activities have been crumbling for some time, GLBA is better viewed as ratifying, rather than revolutionizing, the practice of banking.

We attribute repeal of these prohibitions to the increasingly persuasive evidence from academic studies of the pre-Glass-Steagall era, the recent favorable experience in the United States following partial deregulation of banking activities, the experience of banking systems abroad with broader scopes for banking activities, and rapid technological change in telecommunications and data processing.

GLBA generally adheres to the principle of "functional regulation," which holds that similar activities should be regulated by the same regulator. How regulators will in practice coordinate their efforts so that the safety and soundness of the banking system is maintained efficiently remains to be seen.

Broad banking companies may produce financial services at greater convenience and lower cost. Increased product diversification may simultaneously make them less prone to failure. It is unclear, however, whether continuing technological advance or any future banking liberalization will favor "one-stop shopping" via broad banking companies, or perhaps will favor delivery of the financial products and services of multiple companies through an internet portal.