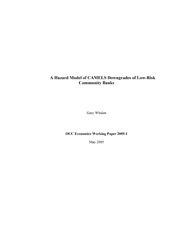 Over the past 30 years, a great deal of research has investigated the potential usefulness of early warning models as offsite supervisory tools. Accurate offsite models allow bank supervisors to identify high-risk banks at a reasonable length of time prior to marked deterioration in their financial condition, without the use of expensive, time-consuming on-site examinations. This allows scarce examination resources to be used more efficiently and permits supervisory constraints to be imposed or rehabilitative strategies put in place expeditiously and so minimize the risk of costly failures.

This paper develops a Cox proportional hazard model that is designed to predict the probability that a low-risk community bank will be downgraded to high-risk status over an eight-quarter time horizon. The risk dichotomy is made on the basis of CAMELS composite supervisory ratings with a score of 2 separating the low- and high-risk groups. Models are estimated using independent variables measured at year-end 1997, 1998, and 1999. The out-of-sample forecasting accuracy of the estimated models is examined using data for year-end 2001. In general, the hazard models are found to produce relatively accurate risk classifications out-of-sample. The accuracy of the 1997 specification suggests that these hazard models are relatively stable over time, implying that frequent, costly re-specification is not required. The hazard models are also found to be considerably more accurate than two simpler supervisory screens. Taken together the out-of-sample tests of classification accuracy suggest that this sort of statistical model is a promising, relatively low cost early warning tool.