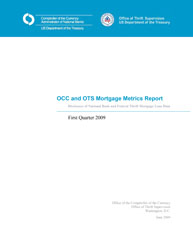 Delinquencies and foreclosures on first-lien mortgages continued to increase during the first quarter of this year, but loan modifications also increased and the trend continued toward more sustainable modifications with lower monthly payments.

The report, based on data from loan servicing companies that manage 64 percent of all first-lien U.S. mortgages, shows:

The OCC continues to refine the Mortgage Metrics report each quarter. In previous quarters, the agencies added data on the performance of modified loans, and information on sustainability and changes in payments that result from modifications. This report adds information on the types of actions taken to modify loans. It shows that servicers most often change multiple terms when modifying mortgages to achieve sustainable modifications. Capitalization of delinquent interest, fees, and advances, combined with interest rate reductions and extended maturities, were the predominant combinations during the first quarter. Interest rate and payment freezes, principal reductions, and principal deferrals were less prevalent.