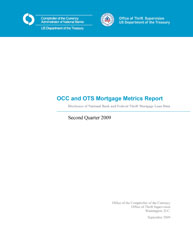 Actions to keep Americans in their homes grew by almost 22 percent during the second quarter of 2009, according to a report released today by the Office of the Comptroller of the Currency and the Office of Thrift Supervision.

The latest OCC and OTS Mortgage Metrics Report showed that difficult economic conditions resulted in higher rates of mortgage delinquencies and foreclosures in process, which increased to 8.5 percent and 2.9 percent of all serviced mortgages, respectively, but as the Administration's "Making Home Affordable" program got underway during the quarter, efforts to assist homeowners and avoid loss were also on the rise.

Since the first quarter of 2008, these home retention actions have increased by nearly 75 percent.

The "Making Home Affordable" program requires borrowers to successfully complete a three-month trial period before loan terms can be permanently modified. The Mortgage Metrics Report classified actions under this program as payment plans. As a result, payment plans increased by 73.9 percent for the second quarter of 2009, while loan modifications declined by 25.2 percent. Successfully completed trial period payment plans will be reported as loan modifications in future reports.

Other key findings of the report include:

The report, produced quarterly, covers 34 million loans totaling about $6 trillion in principal balances and representing about 64 percent of all first lien mortgages in the country.