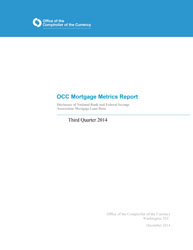 The performance of first-lien mortgages serviced by seven national banks and one federal savings association improved in the third quarter of 2014, according to a report released today by the Office of the Comptroller of the Currency (OCC).

The mortgages in this portfolio comprise 46 percent of all residential mortgages outstanding in the United States—23.6 million loans totaling $4.0 trillion in principal balances. This report provides information on their performance through September 30, 2014.