OCC Reports on Mortgage Performance For Fourth Quarter of 2013 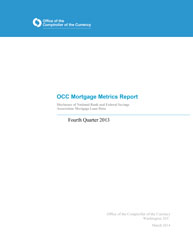 OCC Reports on Mortgage Performance for Fourth Quarter of 2013

The performance of first-lien mortgages serviced by large national and federal savings banks continued to improve in the fourth quarter of 2013, according to a report released today by the Office of the Comptroller of the Currency (OCC).

The mortgages in this portfolio comprise about 49 percent of all mortgages outstanding in the United States—24.9 million loans totaling $4.2 trillion in principal balances. This report provides information on their performance through December 31, 2013.